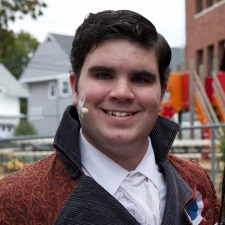 Patrick J. Moskal Memorial Scholarship Fund Patrick J. Moskal was born in Holyoke, son of Edward J. and Patricia A. (Long) Moskal of Holyoke, and was a 2013 graduate of Holyoke Catholic High School. He was a member of the Performing Arts Club at Holyoke Catholic. He did every show while he was at HCHS, performed twice at Disney World, sang at sevneral weddings, and performed at the 15th Anniversary Memorial for John DiNapoli. When he wasn't performing he worked behind the scenes on lighting and set building. His two best performances were as Marius in Les Miserables as a member of the Exit 7 Players in Ludlow and as Jesus in Godspell at St. Cecilia's in Wilbraham. This $500 scholarship is given by his parents, Edward and Patricia in his memory.

Paul D. Browning & Jonathan Herrick Memorial Scholarship Fund Jonathan and Paul were both founding members of Exit 7 and were instrumental in the groups formation and success. Scholarships will be awarded to high school students that have been involved with the Exit 7 Players or Exit 7 Youth Players directly or through the involvement of a family member.

The Exit 7 Players will offer up to two $500 scholarship based primarily on the theatrical involvement of an applicant, their affiliation with the Exit 7 Players, their community spirit and academic achievement. This scholarship is not restricted to theater majors only.

He was a communicant of All Saints Episcopal Church in South Hadley, where he was a junior warden, a vestryman, chairman of the property committee, a building committeeman and a member of the Men's Club.

He was a Woodrow Wilson Scholar and a founder, a director and a stage director of the Exit 7 Players in Ludlow. He belonged to the Granby Lions Club and wrote the town's proposal for a cable television connection.

As one of our founding members, key supporters and long time friend, we are pleased to provide this scholarship to other individuals who share his passion for the theatrical arts and the Exit 7 Players.

Jonathan Herrick Jonathan Herrick was also a founding member of the Exit 7 Players. He was a producer, director, actor, long time board member, and eternal friend. His contributions over the years helped establish the Exit 7 Players and ensure that the organization would be around for years to come. His dedication and love for the theater is an inspiration for thespians young and old.